“Never the spirit was born; 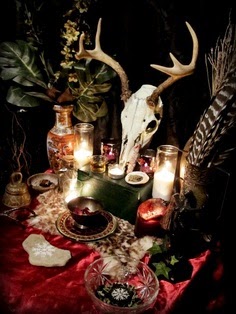 the spirit shall cease to be never;
Never was time it was not;
End and Beginning are dreams!
Birth-less and deathless and
changeless remaineth the spirit forever.
Death hath not touched it all,
dead though the house of it seems!”
- Sir Edwin Arnold


A lot of Pagans love the darkly mysterious paraphernalia, imagery and settings of what I'll call the "Witch's Antinomian Aesthetic." (just Witch's Aesthetic from here on in) Who isn't drawn to that which represents mystery, antiquity, substance, and power? Animal bones or horns on the altar, half-melted candles on authentic appearing human skulls (imagery that represent mortality and the world of spirits), shadowy décor as often as not bathed in the smoke of burning incense, old leather-bound grimoires, fearful (to non-witches anyway) images of gods like Hekate, Cernunnos, Morrigan, colors such as black and red (death and blood, shadows and passion/power), ravens (Pagans seem to love ravens about as much as we love wolves), the moon (naturally), and night in general are part and parcel of the Witch's Aesthetic.

I admit it, I love this stuff. Sure, it can be kitschy if overdone, but I love the aesthetic and find it more compelling than other potential aesthetic sensibilities. For me, as an issue of personal taste, the Witch's Aesthetic is simply more appealing than, for example, a New Age aesthetic with its bright, sunny, rainbow-kissed sensibility. However, because I have great respect for the power of symbol and metaphor, especially in a psycho-spiritual/magickal context, I don't casually embrace the Witch's Aesthetic in either my life or my practice. In my experience, to surround one's self with symbols not invested with purpose is to diminish their potency should one choose to eventually use them with purpose. In other words, anything of the Witch's Aesthetic that is on my altar or in my personal space is always placed there with a full awareness of its purpose and meaning. Even I feel it looks "cool" and witchy, those qualities are far and away of less importance than the deep meaning of the object(s) in question.

It cannot come as a surprise that the Witch's Aesthetic embraces a "darker" sensibility when one considers the fact that witchcraft is essentially an antinomian path. There is an inherent rebellious spirit within the essence of witchcraft, even if that rebellion is, for many, unspoken, unrealized and largely unfocused. To be a witch is to firstly, embrace and reclaim terms (witch and witchcraft) that have, historically speaking, been defined as that which is inherently malevolent. Secondly, to be a witch is to, by varying degrees, stand outside of Western culture and the normative spiritual and religious dynamics of that culture and to be, at least internally, perpetually "other" outside of the Pagan/Witchcraft community.

Whether consciously or unconsciously, the Witch's Aesthetic embraces what I would term "Sacred Darkness." Sacred Darkness is the holy ground where much of what is fundamental, sacred, and powerful in the human experience has been relegated . Within this Sacred Darkness are all of those things our ever-increasingly post-Christian society still, as a matter of course, rejects due to effect of the stranglehold moral dualism has had on the Western psyche for nearly 2000 years. Christianity, as practiced by the masses (ie. exoterically), is a moralistic, solar faith. All that is sinful, according to exoteric Christianity, has been relegated to the shadows. Much of that which is most powerful in the human experience, that which can be overwhelming, transformative, and dangerous, such as, for example, the natural process of death, has been made to seem an aberration not of this world. Death itself has been sealed away into the Sacred Darkness, demonized and turned into the work of The Enemy to be defeated once and for all when Jesus returns in glory to judge the living and the dead.

Can it be any surprise that death, darkness and the seemingly macabre play a role in the Witch's Aesthetic?

That which is culturally repressed will eventually find voice and the Witch's Aesthetic provides one such voice to a greater or lesser extent. To a greater extent when the aesthetic is consciously adopted to knowingly express/reflect the repressed realities in the context of one's spiritual path and to a lesser extent when one is merely the unconscious voice of Western Society's collective neurosis.

To consciously choose one's aesthetic and approach is to be empowered and powerful, while to serve as the unwitting voice of the damaged Western Psyche is to be disempowered no matter how "Darkly Powerful" one believes one appears. To be unconscious is, in my opinion, to reflect a kind of angst ridden spiritual adolescence, a rebel without a cause, or as it has been termed, "Dark Fluffy."