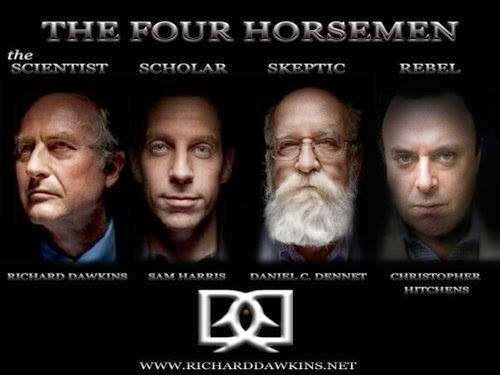 Atheism has come into its own over the last few years primarily, it seems, as a reaction to American Fundamentalist Christianity. Led by the "Four Horsemen" (pictured left) this "New Atheism" has grown in popularity.

However, like nearly anything else, for me, the novelty has worn off. The truth is that, I have grown quite weary of the New Atheists despite the joy I find in watching them intellectually rend the most superficial and farcical aspects of religion....of which there are, admittedly, a great many.

Over the years of reading their books and watching innumerable debates in which members of the Four Horsemen (as they are collectively referred to) tear down the most preposterous ...arguments for the existence of God I have come to notice a pattern. I have come to notice that the New Atheists are at their best when they are able to intellectually overwhelm the shoddy arguments of simplistic religious fundamentalists. Their weakness is however, where religious thought is concerned, that they never really wade out, intellectually speaking, past the shallow end of the pool. The deepest understanding of God challenged by the New Atheists is...perhaps...the bad argumentation of the oft quoted C.S. Lewis...and that's only because he has the cache of being a British Intellectual of sorts. Lewis did go to Oxford after all. Lewis' arguments for belief in God are still, in my opinion, weak and full of inconsistencies. That anyone still refers to Lewis' Trilemma, his "Liar, Lunatic or Lord" argument still leaves me scratching my head.

None of these professional critics of religion...and that is what they have become...reflect on deeper or esoteric spiritual thought. Through their good arguments against bad religion, countless people reject the possibility that we are more than delusional meat sacks who erroneously believe there is more to reality than that which can be measured and quantified.

When the New Atheists, as a whole, have the courage to look at the God of Meister Eckhart, Thomas Merton, Ramakrishna, Rumi, Plotinus, Jewish Kabbalists or sophisticated polytheistic religious thinkers, I'll have greater respect for their rather extreme anti-theist arguments. I won't agree with them, but I'll have greater respect for their absolutist points of view. The New Atheists will never tackle the issue of a more sophisticated conception of the Divine because one has to study for years....as well as practice certain disciplines...in order to experience the "God(s)" of the mystics. The New Atheists and their devotees seem painfully unaware that there are many sophisticated and nuanced experiences and understandings of what most in the West call "God."

It's far easier to poke fun at the God of Christian Sunday School than it is to look deeper. To be fair to the New Atheists, there is a great deal to make fun of. What the New Atheists...and their nearly cultic following does well is provide a needed counterbalance to the tide of know-nothing, dumb, fundamentalistic religiosity that is growing more and more common in the U.S. For that, I salute them.
Posted by Unknown at 6:42 PM